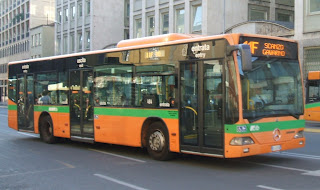 They stop at the railway station and funicolare (funicular) station in the Città Bassa (lower town) as well as other points along the route.

The service is run by ATB who have an information point in Largo Porta Nuova in the Città Bassa.

To check the timetable or for more information about services to other areas visit www.atb.bergamo.it.
Save money by buying a tre giorni (three day) ticket for the local buses and funicular railways, which allows unlimited travel in Bergamo.


Bergamo has two funicolari (funicular railways), one linking the Città Bassa with the Città Alta, the other running from the Città Alta to San Vigilio above it. There are services every few minutes from early in the morning until late at night.

To use the funicular, you can buy a single journey ticket, which you pass through a machine before going through the barrier. Or, if you have a day ticket or three-day ticket for use with the buses and funiculars, just show it to the driver, who will open the barrier for you.

There are frequent rail services from Bergamo to Milan, Brescia, Lecco, Cremona and Sarnico on Lago d’Iseo.

The railway station is in Piazza Marconi in the Città Bassa. You can buy train tickets at the windows in the main hall of the station or from the automatic machines.

Remember to stamp your ticket with the date and time at one of the yellow machines, which are on both sides at the top of the main stairs, and on every platform.

Passengers have to pay a fine if they are found travelling with a ticket that has not been stamped before the train was boarded.

To check the timetable visit www.trenitalia.it.

Although public transport is excellent in Bergamo, you might wish to hire a car to explore the beautiful countryside outside the city.

The lakes of Iseo, Lecco and Como are all within an easy drive of Bergamo, or you could choose to experience the scenic splendour of the valleys north of Bergamo, the Val Brembana and the Valle Seriana.

You can pick up a car at Bergamo Caravaggio airport at Orio al Serio or at several locations in the centre of Bergamo.  Europcar, National, Avis, Alamo, Hertz and Budget are among the well-known car hire firms with offices either in the city or at the airport.

It is probably easiest to book on line in advance. To compare prices and make sure you get the best deals, you can check with our partner, Carrentals.co.uk, the car hire comparison search engine.

For a comfortable air-conditioned ride out to Lago d’Iseo or to the towns in the valleys north of Bergamo take il pullman (the coach).

There are frequent services from the bus station in Via Bartolomeo Bono -- close to the railway station -- to Sarnico, Lovere, Zogno and San Pellegrino Terme.
Visit www.trasporti.regione.lombardia.it to check timetables.

Radio controlled taxis serve Bergamo and the surrounding area.
You can either ring 035.451.90.90 or go to the taxi ranks outside the airport at Orio al Serio or the railway station in Piazza Marconi in the Città Bassa.


Home
Main Sights
Getting Around
Fly to Bergamo