A variation of Bergamo’s local dish, casoncelli alla bergamasca, is currently being enjoyed in London by diners at Spaghetti House restaurants.
Spaghetti Houses are including casoncelli under ‘la pasta artigianale e risotti’ section of their menu.
The casoncelli are described as half moon pasta filled with parmesan, pear, amaretti, beef and pork, tossed with cavolo nero -- a dark-leafed Tuscan cabbage -- and sausage.
It is a tasty version of Bergamo’s traditional dish, providing customers with hearty, warming food in London this autumn.
Spaghetti House restaurants have been serving traditional Italian food since 1955, when the first restaurant was opened in Goodge Street . 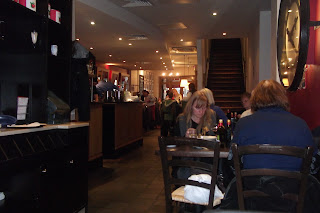 Email ThisBlogThis!Share to TwitterShare to FacebookShare to Pinterest
Labels: Recipes