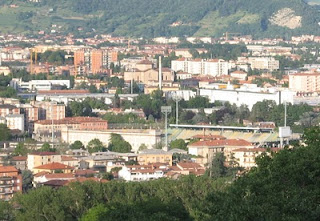 The world famous San Siro stadium in Milan may be just 35 miles from Bergamo, but Serie A football is actually even closer.
Atalanta is a name instantly recognisable to football fans, even to those whose interest in Italian football does not go beyond checking weekly results. But the fact they reside in Bergamo, denoted by the ‘B’ in their full title ‘Atalanta Bergamasca Calcio’, is not commonly known.
The city has a long-standing football tradition. Bergamo used to have a club bearing its name. FC Bergamo was created by Swiss immigrants in 1904, but was challenged three years later by a rival club, Atalanta, named after the female athlete of Greek mythology. The clubs existed alongside each other for a number of years but any rivalry was put aside when they merged in 1920, forming Atalanta Bergamasca Calcio, with the abbreviation Atalanta quickly becoming common.
This development has undoubtedly been to the benefit of football in Bergamo. The city’s modest population of just 116,000 can only be expected to support one club, especially given that Atalanta are consistently in the shadow of their more famous neighbours, AC and Inter Milan.
There are 34 cities in Italy larger than Bergamo, many of which are home to clubs far less successful than Atalanta. Sometimes referred to as ‘Regina delle provinciali’, the queen of the provincial clubs, Atalanta’s Coppa Italia triumph in 1963 remains their only major honour. However, in 1988 they reached the semi-finals of the European Cup Winners' Cup, beating Portuguese giants Sporting Lisbon on the way and have also finished as high as fifth in Serie A.
Atalanta are currently competing at the top level, with the stars of Inter, Juventus, AC Milan and Roma frequent visitors to the Stadio Atleti Azzuri D’Italia, Atalanta’s home since 1928. Pictured above in a photograph taken from Largo Colle Aperto in Città Alta, the old-fashioned and atmospheric ground, a little reminiscent of English stadia of the 1970s and 80s, is on the Viale Giulio Cesare, just two miles from both the centre of the Città Alta and the train station in the Piazza Marconi.
Ticket prices are extremely good value, particularly when compared to the cost of watching the Premier League in England. For the majority of league matches this season, kicking-off at 3pm local time on Sundays, adult tickets are available from 14 euros (£12.40) while children under 14 are admitted to all games for three euros (£2.65). Even when the visitors are their giant neighbours Inter and AC Milan, clubs not particularly liked by Atalanta mainly because they are perceived to have encroached on their support base, adult prices start at just 22 euros (£19.40).
While the iconic blue and black stripes of Inter Milan have been thrust into the limelight recently by them reaching the Champions League semi-finals, the blue and black stripes of neighbouring Atalanta have been merely battling to avoid relegation from Serie A as the season nears its end.
So, if you will be in Bergamo on a Sunday over the next few weeks, be sure to visit the Stadio Atleti Azzuri d’Italia to give them a cheer!

Email ThisBlogThis!Share to TwitterShare to FacebookShare to Pinterest
Labels: Football