When the bell tolls for the Bergamaschi 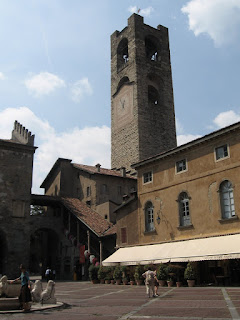 The distinctive 'big bell tower', il Campanone, in Bergamo’s Città Alta (upper town) is a familiar part of the sky line, visible from miles away.
Centuries ago il campanile (the bell tower) was at the heart of every community and was a landmark for travellers on horseback aiming to reach their home town or city.
Bergamo’s bell tower dates back to at least the 12th century. It is also known as the Torre Civica (Civic Tower) and stands next to the Palazzo della Ragione, more than 52 metres tall, dominating a corner of the Piazza Vecchia. From the top there are wonderful views over Bergamo and the surrounding countryside.
If you are in the Piazza Vecchia at 10 pm on any evening you will hear the bell toll 100 times marking the ancient curfew, when the gates in Bergamo’s walls were locked at night to keep the city safe from outsiders. The bell tolled at 10 pm to remind the Bergamaschi that it was time to come back inside the walls or be locked out for the night.
The structure of the tower has been modified over the centuries because of fire damage and being struck by lightning. A clock face was added to it in the 15th century.
The big bell itself had a narrow escape during the Second World War when the Germans considered melting it down to manufacture weapons.
Il Campanone is open on Saturdays and Sundays, but can be visited by request between Tuesday and Friday.
Opening hours vary according to the time of year so it is a good idea to check with the Tourist Information Office in Via Gombito to help you decide when to visit.
Language point
Il campanalismo
Campanone, meaning big bell tower, is a variation of the word, campanile.
Because il campanile (the bell tower) has come to symbolise the heart of a local community, the word campanilismo has been developed by Italians to mean exaggerated local patriotism or parochialism, or excessive support for a local or restricted group, as opposed to general promotion of a community.
Posted by The Editor at 2:38 PM