From 10.30 tonight till 12.15 am, seven bells will ring one after the other in Bergamo to mark the festival for Sant’Alessandro. 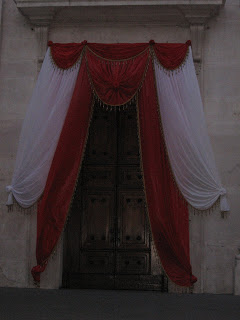 The bells of the Torre Civica, Cattedrale di Sant’Alessandro, Santa Maria Maggiore, Sant’Agata al Carmine, Sant’Alessandro della Croce, Santa Caterina and Sant’Alessandro in Colonna will all ring to celebrate the festival to honour Bergamo’s patron saint.
The concert also aims to underline the musical and historic value of the bells to the city of Bergamo .
The programme begins at 10.30 with the bell of the Torre Civica , Il Campanone (big bell), and will finish with all the bells ringing together at midnight when the festival begins.
The annual celebrations on August 26 in Bergamo commemorate the date in 303 that Sant’Alessandro was martyred by the Romans for refusing to renounce his Christian faith. It is believed Alessandro was a devout citizen who had continued to preach in Bergamo, despite several narrow escapes, but was eventually caught and suffered decapitation. The picture above shows a church door in Bergamo decorated for the festival.
A series of religious, cultural and gastronomic events will takes place in his name over several days throughout the city, which will be decorated with festive lights.
Porta Sant’Alessandro, which leads from the Città Alta (upper town) to Borgo Canale and San Vigilio, was built in the 16th century. It was named after a fourth century cathedral that had originally been dedicated to the saint but was later demolished.
Near the gate you will find a column with a plaque describing the structure of the ancient cathedral, which was originally built on the saint’s burial spot.
Porta Sant’Alessandro became a checkpoint manned by customs officers, who would tax farmers from outside the city bringing in vegetables, eggs, chickens and wine to sell to residents of the Città Alta (upper town).