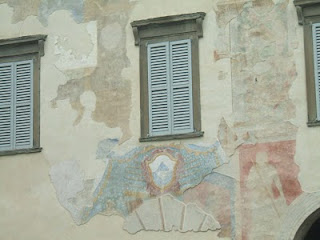 In the 16th century, Bergamo’s Città Alta (upper town) must have been a glorious sight with the outside walls of many of the palaces elaborately decorated with frescoes.
To get an idea of what the city would have looked like, walk down Via Porta Dipinta from Piazza Mercato delle Scarpe in the direction of Porta Sant’ Agostino.
Via Porta Dipinta was an important route into the Città Alta from medieval times and many important families built palaces along it.
You will see traces of frescoes dating from renaissance times on the facades of many of the buildings, similar to the example shown here (above).
Look out for the Palazzo Moroni at number 12, which is considered to be one of the best examples of baroque architecture in Bergamo .
Via Porta Dipinta (literally Street of the Painted Gate) takes its name from a medieval gate, of which only a few traces now remain, that was richly decorated. It was sited near the water fountain that you will notice in an archway on the right hand side of the road.
After passing through Largo San Michele al Pozzo Bianco the road curves round to take you through Porta Sant’ Agostino into the Città Bassa (lower town).
Home
Posted by The Editor at 2:34 PM

Email ThisBlogThis!Share to TwitterShare to FacebookShare to Pinterest
Labels: Art, Things to see