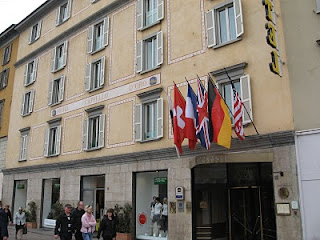 What was once an old inn in the heart of the Città Bassa (lower town) in Bergamo is now a stylish Best Western hotel with every modern comfort.
The Cappello d’Oro in Viale Papa Giovanni XXlll, near Porta Nuova, first became a hotel at the beginning of the 20th century.
A hundred years later it was again refurbished, and now provides guests with four-star accommodation and the latest amenities.
Last weekend I had a very comfortable stay in the hotel, which was quiet and relaxing, even though it is close to the shops, bars and restaurants of the Città Bassa.
The reception area is modern and spacious with a marble floor, white statues and potted palms, and the helpful staff are smartly dressed in tail coats.
My room was very well decorated and furnished and had satellite television, a minibar and tea and coffee making facilities. The immaculate bathroom was well laid out.
An extensive buffet breakfast was served in the hotel’s Ristorante del Moro, which also offers a lunch and dinner menu, including traditional Bergamo dishes.
All 89 bedrooms have wi-fi connection and there is also a computer provided free of charge for the use of guests, just off reception.
The location of the Best Western Premier Hotel Cappello d’Oro is ideal, within walking distance of the railway and coach stations and the funicular to the Città Alta. It is also on the main bus route that links the airport at Orio al Serio with the railway station and the Città Alta.
Just round the corner from the hotel at Porta Nuova are some of the best shops and restaurants in the Città Bassa. And a short walk away is the Sentierone, with its smart bars and the Teatro Donizetti.


Book with Hotels.com or for more information visit www.hotelcappellodoro-bg.it or telephone 035 2289011.
Posted by The Editor at 3:40 PM

Email ThisBlogThis!Share to TwitterShare to FacebookShare to Pinterest
Labels: Hotels