Try bar at the hub of the Città Bassa

Sit and watch the world go by from a table outside the Caffetteria del Borgo in the Piazza Pontida in Bergamo’s Città Bassa (lower town).
The piazza is close to a point that for centuries was known as Cinque Vie (five roads), where traffic from Milan, Lecco, Treviglio and Crema would converge. 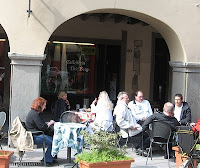 Piazza Pontida (see map below) was where the goods arriving in Bergamo would be unloaded and bargained for before being sent up to the Città Alta.
Some of the portici (porticos) date back to the 15th century, when farmers and merchants would shelter under them while negotiating over the goods, and story tellers and poets would roam from one inn to the next.
The Caffetteria Del Borgo (pictured), at number 40, has tables both inside and outside and it is useful to know that it serves food all day.

We enjoyed a good pizza in the middle of the afternoon, having just arrived from Milan Bergamo airport at Orio al Serio.
The pizza tasted all the better for being washed down with a particularly good bottle of Valcalepio Bianco, which had been produced to commemorate the recent rally of the Alpini in Bergamo.
For more information about Valcalepio, a wine produced locally, click here.

Email ThisBlogThis!Share to TwitterShare to FacebookShare to Pinterest
Labels: Bars and Cafes, Squares