An interesting building on the west side of the Piazza Vecchia in the Città Alta (upper town) is the 14th century palace that used to be the residence for the Venetian rulers of Bergamo.
The Palazzo del Podesta Veneto (the Palace of the Mayor of Venice) now houses the University of Bergamo’s Faculty of Foreign Languages and Literature. 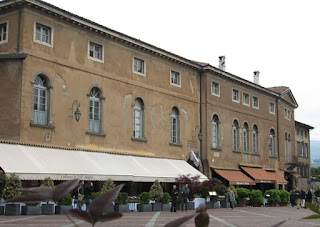 The palace was originally built by the powerful Suardi family of Bergamo in about 1340 and was once decorated with frescoes by Bramante. The remaining fragments of the frescoes are now carefully preserved inside the nearby Palazzo della Ragione.
The palace became the residence of the Podesta, the mayor sent to govern Bergamo, usually for a period of 16 months, by the Venetians.  The various Podesta ruled Bergamo from there from the 16th century until the end of the 18th century, when the city finally became free of Venice.
The ground floor of the palace is now occupied by two restaurants, the Colleoni e dell'Angelo and the Ristorante San Michele.

Email ThisBlogThis!Share to TwitterShare to FacebookShare to Pinterest
Labels: Palaces, Things to see