Past secrets of Bergamo’s medieval houses

An interesting architectural feature in Bergamo’s Città Alta (upper town) can be seen in Via alla Rocca. 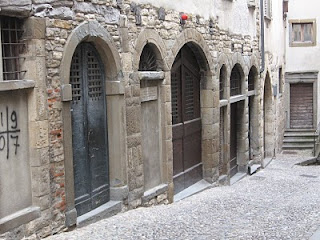 As you climb the narrow winding street (pictured) towards La Rocca you will see on your right hand side some medieval houses that have a narrow, walled up opening next to the main door.
These were believed to be opened up only for the funeral of an important member of the family living there to let the coffin out.
They have therefore become known as ‘doors of the dead’ and could be connected with the phrase ‘at death’s door’.
Behind the walled up opening you will always find a very steep staircase without any corners leading to the top floor.
On a lighter note, there is also the theory that the doors could have been opened up to let through a bride’s chest, the most important piece of furniture to be kept on the upper floor of the house.
It would be nice to think that the openings had a joyful as well as sombre purpose.
The map below shows the position of Via alla Rocca in the Città Alta. The funicular station is in the square nearby where Via Porta Dipinta and Via San Giacomo converge.
View Larger Map