The beautiful Palazzo della Misericordia Maggiore in Via Arena in Bergamo’s Città Alta houses a unique and fascinating museum. 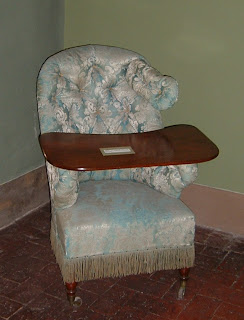 The palace at No 9 is home to the collection of furniture, paintings, books and musical scores brought together to commemorate the life of composer Gaetano Donizetti, who was born and died in Bergamo.
The building dates back to the 13th century but was remodelled in the 17th century.
Via Arena is off the Piazza Santa Maria Maggiore and climbs towards the west end of the Città Alta. It can be accessed after leaving the church at the south entrance.
The museum is dedicated to the life and works of Donizetti, who composed about 70 well-regarded operas in 30 years, making him one of the leading composers of opera in the early part of the 19th century.
Visitors are able to see Donizetti’s furniture, including the bed (below) he died in and the chair (above right) he used to sit in towards the end of his life when he was living in Palazzo Scotti in Città Alta as the guest of a wealthy family. The composer’s piano, portraits, original scores from his operas and letters are also on view in display cases.
The palace has a very decorative interior which is worth looking at for its own sake, but there are also plenty of items in the collection which will be of interest to music lovers. 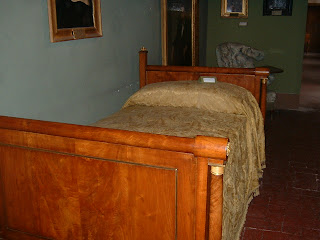 To add to the atmosphere as you look round the museum, you hear occasional snatches of music played by students using the practice rooms of the musical institute, which is also housed in the palace.
The Donizetti Museum is open from Tuesday to Sunday. For opening times check with the Ufficio di Informazione Turistiche (Tourism Information Office) in Via Gombito.
Home
Posted by The Editor at 12:51 AM

Email ThisBlogThis!Share to TwitterShare to FacebookShare to Pinterest
Labels: Museums, Things to see