Pause at Pisogne to see the frescoes

The historic town of Pisogne at the northern end of Lago Iseo is an easy day trip from Bergamo , by car, bus or train.

You can also reach Pisogne by boat from Lovere, which is on the opposite side of the lake.
Since the early 20th century a railway line has run to Pisogne from Brescia , the route continuing up into Val Camonica.
At Pisogne there are cafes at the side of the lake where you can sit and enjoy the beautiful views of Lago Iseo.
But the town also has a medieval centre away from the lake with plenty of other things to see. 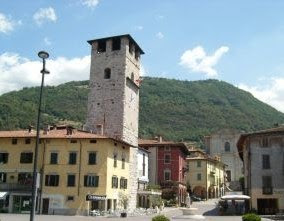 The 14th century Torre del Vescovo (Bishop’s Tower, pictured right), which is visible from the lake as you arrive by boat, has become a symbol of the town.
Also well worth a visit is the 15th century church of Santa Maria della Neve (Saint Mary of the Snow), which has frescoes by Romanino depicting the Passion. These are so beautiful that they have been referred to as ‘the poor man’s Sistine Chapel’.

Despite the fact that they were painted at the beginning of the 16th century, the characters are very realistic with interesting expressions on their faces.

Email ThisBlogThis!Share to TwitterShare to FacebookShare to Pinterest
Labels: Beyond Bergamo