Artist Lorenzo Lotto is said to have enjoyed the happiest and most productive period of his life while living in Bergamo between 1513 and 1525.
The Venetian born painter was famous for his altar pieces, paintings of religious subjects and portraits.
While in Bergamo he lived near the church of San Michele al Pozzo Bianco (Saint Michael at the white well), which is probably why this ancient church contains one of Lotto’s most important works, Vita di Maria (history of Mary’s life.)
A short walk down the Va Porta Dipinta from the Piazza Mercato delle Scarpe in the Città Alta (upper town) takes you to Largo San Michele al Pozzo Bianco (shown on the map below).
The church, devoted to Saint Michael, dates back to the eighth century, but was rebuilt in the 12th and 13th centuries.
The stone façade was completed during restoration work carried out early in the 20th century, but the interior still has many medieval features, such as brick archways and an open truss roof.
The chapel devoted to the Virgin Mary, to the left of the altar, is entirely decorated with the frescoes of Lorenzo Lotto. 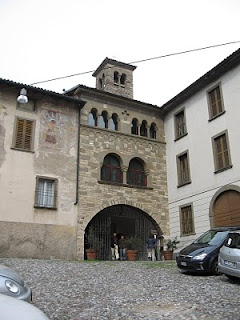 San Michele contains many other beautiful 15th and 16th century frescoes and is a popular choice for weddings.
But don’t spend a lot of time looking for a white well outside the church, as it no longer exists.
It is believed the church derived its name from a well that used to stand in the middle of the square, which has now been paved over. It probably took water from the same cistern that filled the 13th century fountain in nearby Via Osmano.
Il pozzo bianco must have been a vital local amenity when Begamo did not have so many bars.
View Larger Map