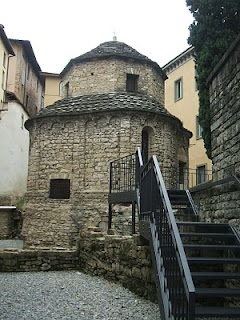 A tiny church that dates back to the year 1000 is still standing in Bergamo’s città alta (upper town).
Il Tempietto di Santa Croce (small temple of the holy cross) can be viewed through an iron gate next to the south portal of the church of Santa Maria Maggiore .
The carefully preserved old church, which was built on the plan of a Greek cross, was restored in the 16th century and still contains some 16th century frescoes.
To get the best possible photographs of il Tempietto, take your pictures through a gate from the small street off Via Arena on the right hand side.
Il Tempietto is considered to be the finest example of Romanesque architecture in Bergamo .
Check the arrangements for opening up il Tempietto by enquiring at the Tourism Information Office in nearby Via Gombito.

Email ThisBlogThis!Share to TwitterShare to FacebookShare to Pinterest
Labels: Churches, Things to see